I was fortunate to be in the audience when Miyako, Hinagiku, Ryoka, Tomitae and Tomitsuyu (Geiko and Maiko from Gion Higashi) performed in Perth, Western Australia, on Friday evening.  (Click on the images below to enlarge them.)

It was the first time that Geiko and Maiko have ever come to Australasia.  They were here as guest performers, brought over by the Japanese Government, for The Perth Japan Festival 2016 (as well as performing in Sydney and New Zealand).

Tomitsuyu reminding me of The Statue of Liberty

It was a beautiful performance.  I only wish they had danced three times as long as they did.

After the show; Ryoka and I

There were two outdoor performances in the centre of Perth shopping precinct on the following day.  I will write about that (with lots of photos) in the next day or two.

It was a whirlwind visit.  Our honoured guests have already left us and are on their way to New Zealand where they will perform in Auckland and Wellington on 1st and 5th March respectively.

I hope to follow their visit with my own performance; that is, a drawing to commemorate an absolutely unique-to-Perth experience.

Art made with coloured pencils does not have to be sharply defined, precise and detail-filled. Pencils can create their own version of impressionism; loose and soft with boundaries spilling over, merging and melting into one another.

As you, Honourable Viewer, are not given every single bit of information, you are free to fill in the gaps. You can make it your own story, perhaps become one of the people strolling.  While lack of specific detail makes the drawing impersonal on one level, it makes it more personal on another.  There is plenty of room for you to add, interpret and imagine.  You can actually put yourself into the picture. 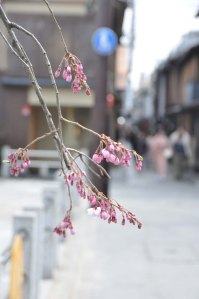 The source photo for this drawing in its entirety. You can see what a small part of the photo I chose for my composition.

For the past month I have been working on “Encounter”.  The drawing came out of a combination of two photos I had taken back in spring, 2013.  In this drawing I take reality and spin it into a slightly different story.  The term for this process is ‘artistic license‘. My bending of the truth makes for a much more interesting tale than what I actually saw through the lens of my camera.  What do I mean?  I invite you to look at my two source photos.  (Clicking on them will enlarge them.)

If you can be bothered scrutinizing the photos and comparing them to the drawing – (I suggest you simply take my word for it) – you will see that bits from both photos appear in the drawing.  Importantly, I have subtracted that which is unnecessary; various pipes, a Marlboro cigarette ad and, the main omission, the girl walking the dog.

Geiko and dog exchange glances as they approach one another on a Pontocho morning.   I can almost imagine them uttering morning greetings, “Ohayou gozaimasu”.   This is another of my drawings, therefore, which lurks under a based on a true story umbrella.  Julie’s truth.

Check out  Contents of Posts Index 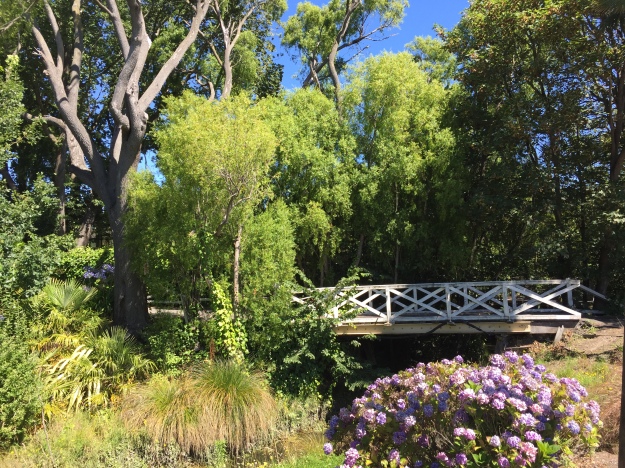 Down beside the Avon river there used to be genteel houses set among lush gardens.  I used to think that if I lived in Christchurch, I would like to live in one of these old houses.   Now look.  The houses are gone. 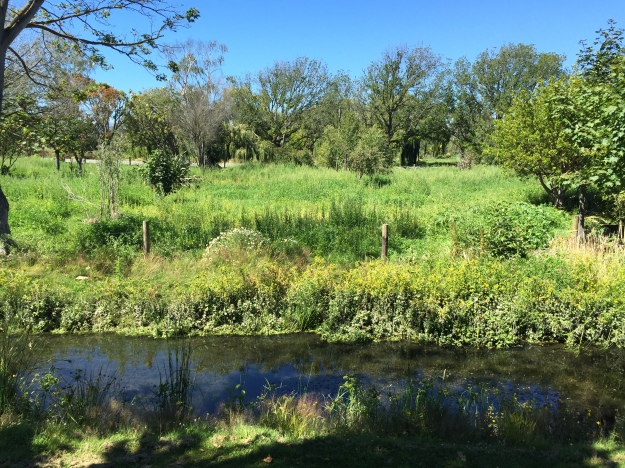 The river is still there, flowing peacefully in summer.  What used to be suburban houses in established gardens are now lumpy fields containing grasses, flowers, weeds, flowering bushes and trees.  Wilderness is taking over.

It is just impossible not to look, open-mouthed, at the transformation.  Whole suburbs, damaged by the 2010 earthquake and then decimated by the following 2011 quakes, were eventually demolished.  What I show is just a minuscule area of “Crown Clearance Zone”; huge tracts of land proved to be too dangerous for people to inhabit, now owned by the Crown.  The thing is, these spaces are kind of beautiful.  If you didn’t look too closely, you’d think you were driving through parkland.

Every time I visit Christchurch I end up singing to myself the Talking Heads song “Nothing but Flowers“.  Here are a few lyrics, “This used to be real estate / now its only fields and trees / Where, where is the town? / Now it’s nothing but flowers…”

“Don’t leave me stranded here / I can’t get used to this lifestyle.”

Five years after the most major quake, much of Christchurch is thriving.  But some areas, such as this piece of Dallington, won’t be populated by people any more.  Birds sing and the odd cat stalks through the undergrowth…

Click on Welcome to Christchurch (September 2013) and Christchurch Revisited (April 2014) to see my photo-essay posts from two former visits to the Garden City.