Are you a street art fancier?

While I photographed a huge hedgehog on a wall in Shoreditch, this gentleman stood across the road watching me.  I wasn’t even aware that he was in my photo.  He crossed over, came up to me and asked “Are you a street art fancier?”  Thus followed a conversation on the subject.  He told me that one of the artists lived right behind where we were standing (but I can’t remember what her name was).  I said that yes, I was a street art fancier.  Below are some of the images I captured during my time in London. 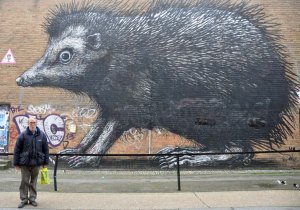 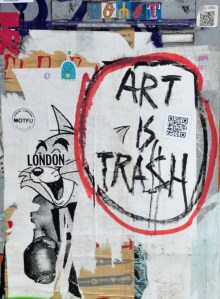 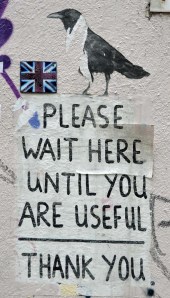 I came across a guy talking to a group of people about street art.  It was a walking tour of some sort.  I waited till he finished talking and then asked how I could get onto one of these tours.  The guy’s name was Josh and the tour was an introduction to the history of East London with an emphasis on street art.  If ever you get to London I highly recommend this tour.  The website is http://www.alternativeldn.co.uk  I went on the walking tour with my family a couple of weeks later.  It was one of the highlights of my trip.  When I returned for the tour at the designated time and place I asked “Is this the street art tour?”  Josh replied “It is SO MUCH MORE than a street art tour”.  And it was!!! 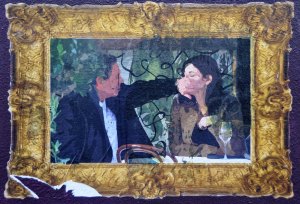 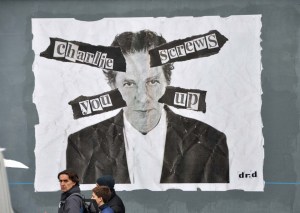 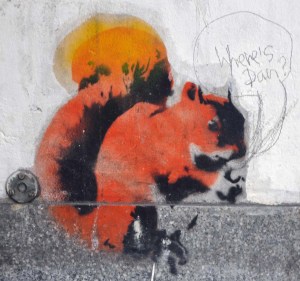 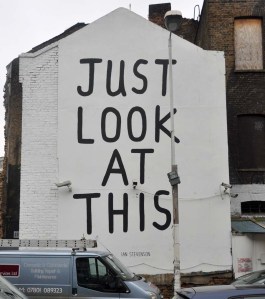 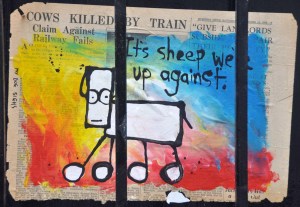 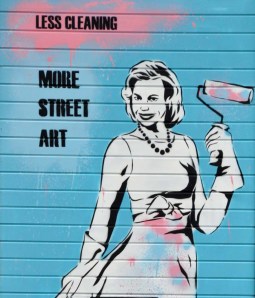 I learned that graffiti taggers are on the opposing team to street artists.  They think that street art is naff hence they often tag over the top of it and mess it up.

Is the following photo of street art or graffiti?  I guess you’d say the latter – but it still caused me to stop in my tracks and laugh.

Street art sure ain’t paid though some is permissible and some is illegal.  ‘Permissible’ means that some business or other has allowed an artist to work on its walls.  Street art done with permission is often much more time consuming than art done on the run; the latter is done as fast as possible (or made off-site and then pasted or sprayed on site).  The piece below is an example of art done with permission.  The artist still doesn’t get paid but he doesn’t risk fine or arrest either.  This whole massive work was done with spray cans which is almost an impossible feat and took extrarordinary skill to get the lines so even.

While I hunted out street art in East London (on three separate occasions) I felt that it was like looking in an art gallery only better as I had to seek out the work myself – rather like being on a treasure hunt.  Yes, some is huge – but some is so discreet you wouldn’t know it was there unless you were ‘forensic’ about finding it.  The two following images show tiny works – both of which I missed until Josh (during the Alternative London tour) pointed them out.

So many people love street art (the humour and brilliance one can find) that you can buy your own bits and pieces of it from shops which make profit from photographing examples and then mass producing fridge magnets and the like.  Of course the artists who thought the designs up don’t get a red penny from it.  The original works may disappear in a minute.  I guess at least these magnets etc give some permanency to them…one way of looking at this type of ‘art theft’.

Why do we artists do it?  I’m not a street artist but I am an artist.  Even when one is a regular gallery-exhibiting artist, there is no guarantee of pay.  Something might sell but it might not.  Gallery-exhibiting or street-exhibiting, we are compelled to make art and then we do what it takes to get seen.  Our currency is not necessarily money.  It CAN be – and we’d LIKE it to be – but sometimes our currency is just admiration or notoriety. 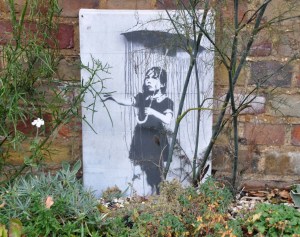 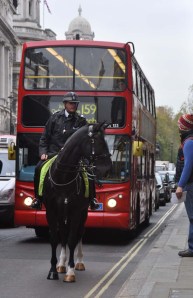 Ah, I do love the horses…so I seek them out.  They are easy to find in London.   On my way to see the Horse Guards I enjoyed the sight of a mounted policeman giving directions to a backpacker.  It looks like the horse is joining in the conversation.   Good old double-decker bus behind – shows that this could ONLY be London.

If you want to see the changing of the Horse Guards, turn up at Horse Guards Building (Whitehall) before 11.00 weekdays or 10.00 Sundays.  (It is just past Trafalgar Square.)

A few minutes before the allotted time, those who are going to ‘change’ come out of the inner courtyard into the parade ground.  On this day the Life Guards in their scarlet coats were on their way out. 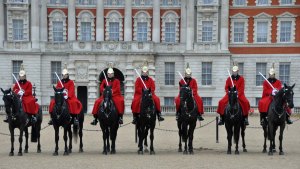 They stand around in the open drill ground waiting for their replacements to turn up.  But it can be a bit boring and a horse can’t help conversing with another horse at a time like this…to the amusement of their riders (which you can discern if you click on the next image to enlarge it).

OK, so I got a bit bored too.  I looked at the squirrels in St James Park while I waited for the Life Guards to head back up Horse Guards Road.

It takes about half an hour after the replacements arrive before the horses move off.  After Horse Guards Road, they turn into Pall Mall, past Buckingham Palace and return to Kensington Palace Barracks.  The light conditions were too dull to get good photos of the Blues and Royals in their dark blue coats so I only show the Life Guards. 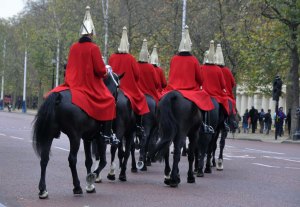 However I returned a few days later for another dose of the horses.   This time the Blues and Royals were on duty and the Life Guards were on their way to change with them.  The three photos below show the Life Guards being escorted TO the parade ground for the changing of the guard.  I’m looking back up Horse Guards Road with Nelson’s Column in the distance.  What a beautiful police horse…such pride in his face! 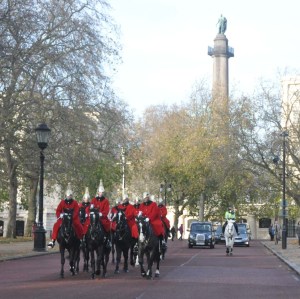 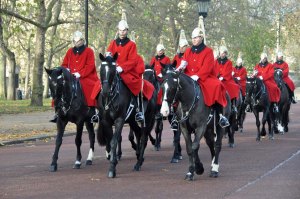 Below you can see the Horse Guards Parade and the buildings of Whitehall with the London Eye in the distance.  The two police escorts leave the grounds while changing is taking place.  These two policemen were talking about what colour shirts they were planning on wearing to a function (white).  True story.  Anyway, the policemen disappear into St James Park for about 20 minutes then return to escort the changED guards back to their barracks.  (Maybe they have a nice cup of tea.)

There go the Blues and Royals, being escorted back to barracks, and there is that lovely grey police horse again.  I was very close to Buckingham Palace for the photos below – so that I could photograph the horses as they rode down Pall Mall. 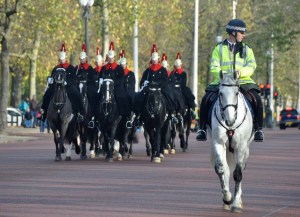 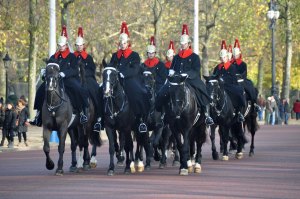 One more horse to finish off.  This was in front of Kensington Palace on another day. 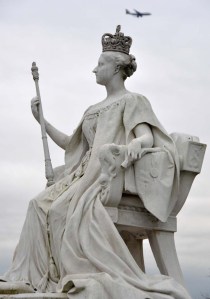 The world is a changing place…as jets dash over Queen Victoria…but thank goodness for the constancy of London’s horses. 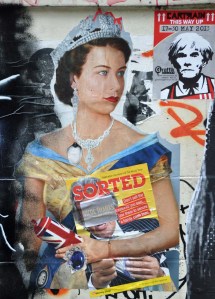 With spray can and Andy Warhol 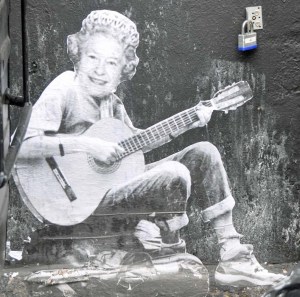 Spray can and monopoly money

Don’t get me wrong.  I am a fan of royalty.  I am also a fan of street art (as you know) and I found plenty of it in London.  So much in fact that there is too much for one post.  As I came across royal image after royal image in the streets of Shoreditch, East London, I realised I would have to give this subject a post all of its own.  I hope The Firm doesn’t mind.

I have so much LONDON to share.  This is an aperitif.

MERRY CHRISTMAS TO YOU.