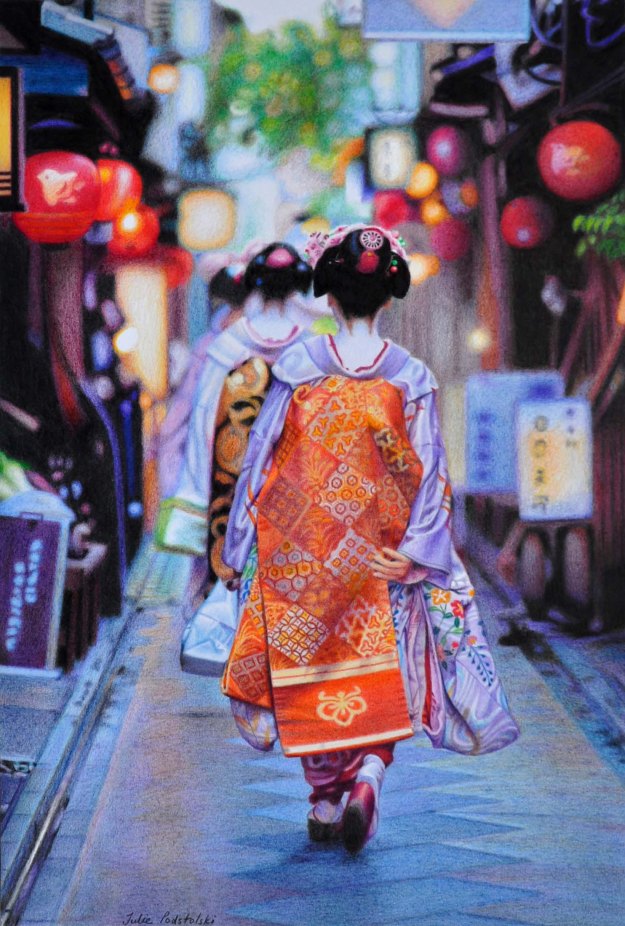 “Spirited Away” 2011, Pontocho maiko leaving the theatre after their dance performance. Photograph by Onihide, drawing by me.

Onihide took the photo and I drew the drawing.

Here is a story about friendship; about people I have never met in person yet I count them among my friends.

There is a photo-sharing site on the internet called Flickr.  I happened across it by chance several years ago when I was googling photos of maiko and geiko (geisha), whiling away my time.

When I found Flickr, I enjoyed it so much that in 2009 I joined up so that I could upload my Kyoto drawings to share with fellow maiko and geiko obsessives.

I started to comment on people’s photos; they commented on my drawings.  Over time friendships developed.  I checked in often to see what new photos my friends uploaded and what conversations followed.  I still do.

There are a few regular photographers who are really good at their craft.  They have many loyal followers of which I am one.

A wonderful photographer was a Japanese gentleman who was known on Flickr as Onihide.  He took many photos of maiko and geiko (who were his good friends).  He was generous with information, answering questions and giving dates of upcoming events.   He did not only photograph maiko and geiko but all aspects of life.  From his photos one could tell that here was a man who closely observed and valued life.  He noticed the small things.

One day he put up a photo which really grabbed me.  Oh – how I would love to draw that image!  It had a lot of soft-focus making it perfect for pencils.  He had let it be known that he did not mind people using his photos for their personal use as long as they asked first.  (What a generous man he was!)

So after some thought I wrote to him to ask if I could make a drawing of his photo.

Here was his reply:-

It’s ok to use my photo for reference.

Then he signed off with his real name.

I was delighted.  I thanked Onihide for his kindness.  I made a print and then I put it in my folder.  That was May 2010.  I wasn’t ready to draw it yet so I left it in the folder until I felt the time was right.

I was absent from Flickr during December 2010 as my family and I spent that month in Paris.

Back home again in January 2011, I was looking at Flickr and to my utter shock I found that while I had been away, Onihide had suddenly passed away.  So many people on Flickr were posting messages of great sadness, disbelief and condolence.

Neither Kyoto nor Flickr would be the same from now on.

Several months passed.  From time to time I looked at my print of Onihide’s photo.  At last I decided that the time had come to do the drawing.  I would always consider it to be his work and therefore I couldn’t think of selling it.  However I had somebody in mind who might want it.

I named the work “Spirited Away” to honour both the filmmaker, Hayao Miyazaki, and the man with the inspired photographs, Onihide.  It seemed to me that Onihide had been, himself, spirited away. 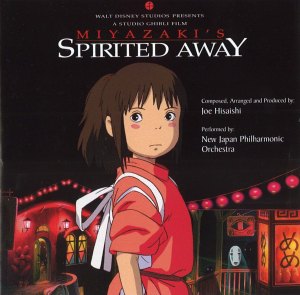 The cover of my “Spirited Away” CD soundtrack.

Whenever I listen to Joe Hisaishi’s orchestral composition which is the soundtrack of “Spirited Away”, I think of Japan, Onihide, life and the passing of life.

As to the drawing itself, it found a very good home with the person I had hoped would adopt it – a close friend of Onihide – who I have also never met.

Postscript:  The person who owns the drawing and I DID meet eventually in 2013.

It Ain’t Necessarily So 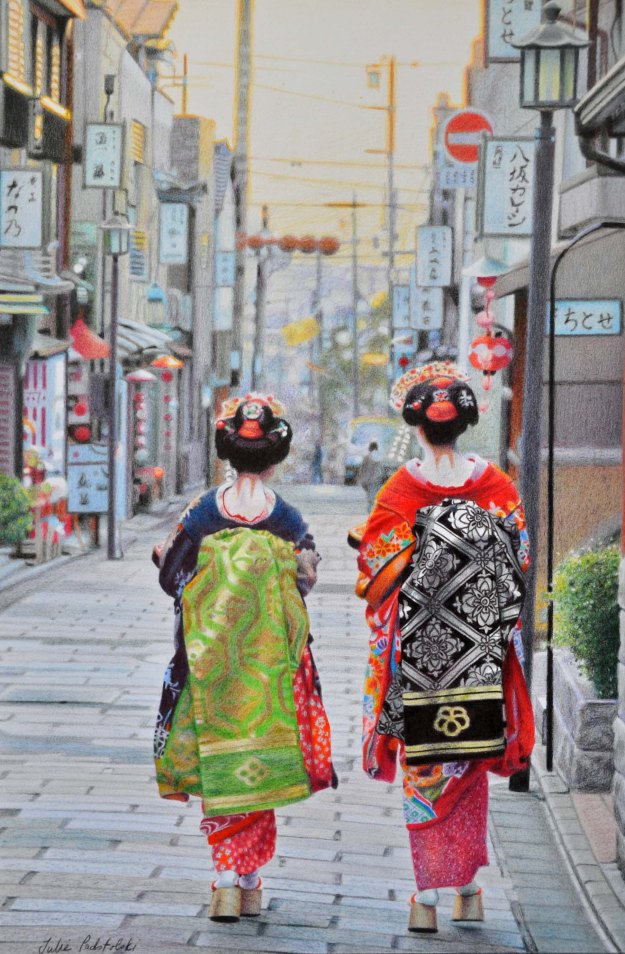 During my early visits to Kyoto I thought that cosplay maiko were real maiko (apprentice geisha).  If I saw a girl dressed in maiko costume, I assumed she was the real deal.

You won’t be ignorant like I was because I am going to tell you about cosplay maiko in this post.

There are several establishments in Kyoto which dress up girls and women as maiko.  Once transformed, the girls promenade around various historic and touristy areas.  It may be done alone but most often it is a shared experience.  They walk together, photograph one another and enjoy being stared at and snapped by tourists.  What a cool day out!

Some people are dismissive of young women who become cosplay maiko, as if they are being dishonest by pretending to be real maiko.  (How dare they?!)  I don’t see it that way.  When I encounter cosplay maiko, or henshin (‘henshin’ meaning ‘to transform’) I am happy to see them having a wonderful time.  Sometimes they ask me to take a photo of them using their cameras and maybe I am asked to pose with them (out of politeness I expect). 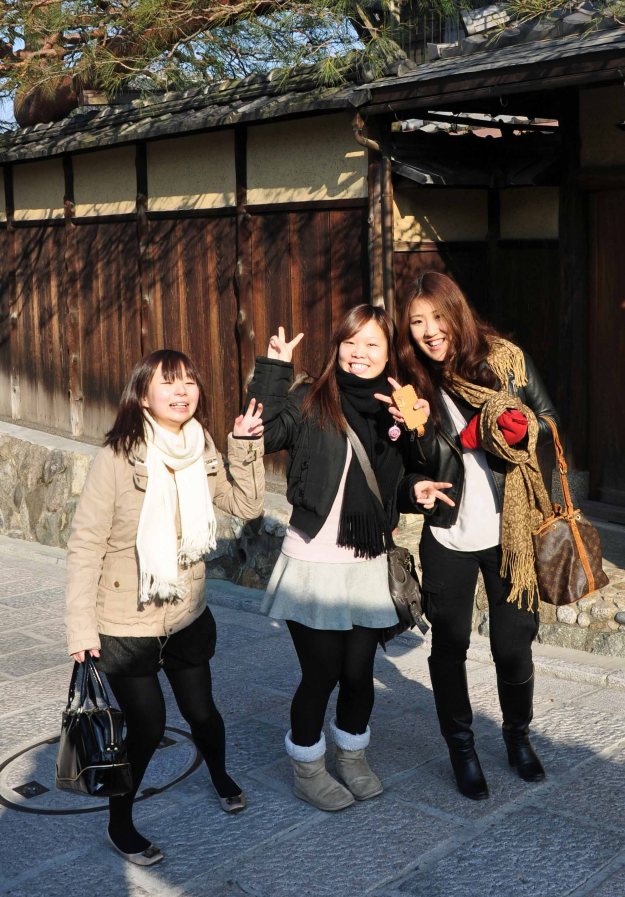 A photo I took of three excited girls who are about to be transformed. 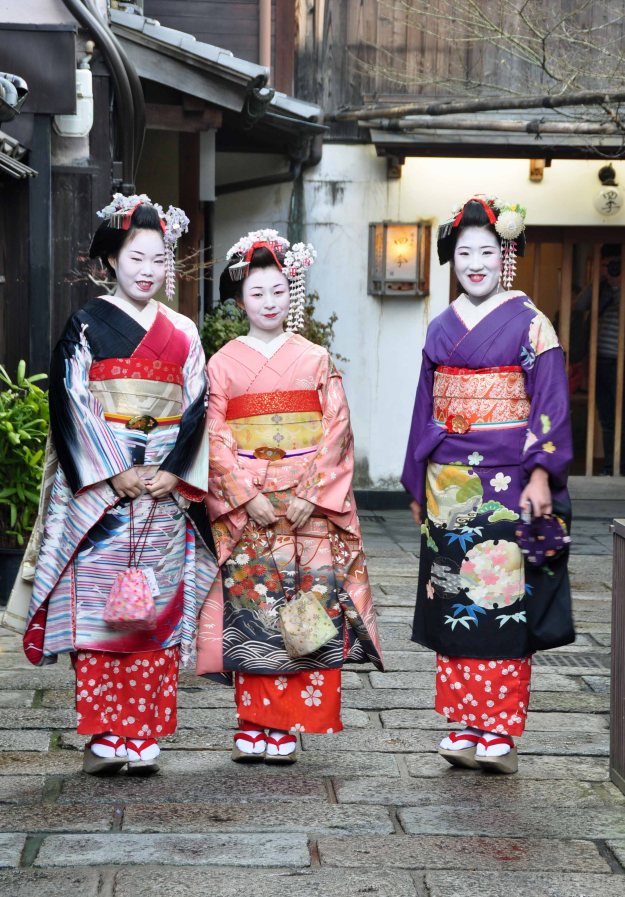 A photo I took of the three girls about an hour and a half later.

When I finally realised that some of the maiko I was photographing were girls dressing up, I was disappointed.   I didn’t mind what they were doing but I didn’t want to draw them.  I only wanted to draw real maiko.

Eventually I came to the conclusion that they can also be good subject matter for drawing.  For one thing, they often walk around the beautiful and historic Higashiyama (Eastern Hills) area where one generally doesn’t find real maiko (resulting in different views of Kyoto from those I normally draw).  And for another, they are having fun so they want to be photographed and made a fuss of.

In 2008 I was in Kyoto with my youngest daughter, Lucy, who was then 14 years old.  We came across a couple of merry maiko.  They were super friendly and so happy to be photographed by Lucy (because they thought she was cute) that we lamented after the photo “Weren’t they lovely, but obviously fake maiko because they were WAAAY too nice!”

It wasn’t until later I found out that they had been the genuine articles after all.  In fact they were Ichifuku-san* and Ichitomi-san of Pontocho.  Below is the photo which Lucy took of them.  (Note: it is always useful to have a cute teenage daughter with you when you want to photograph maiko!) 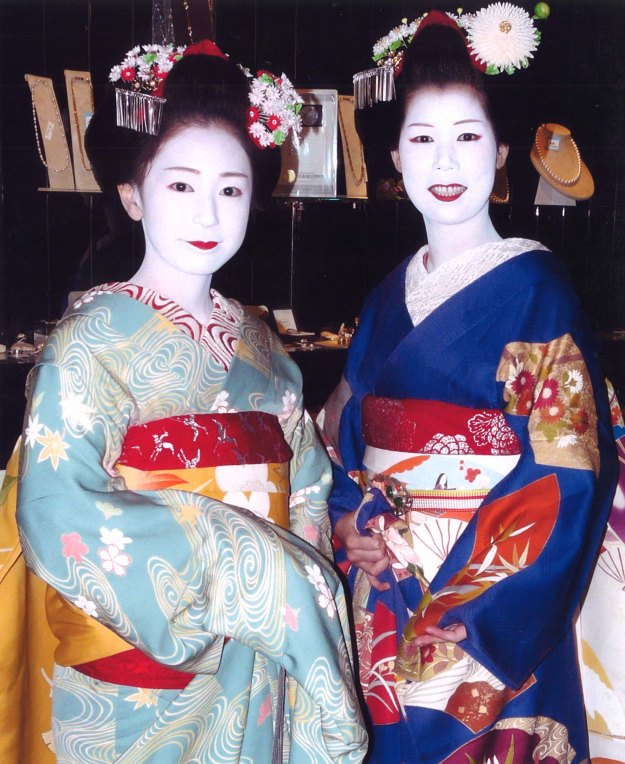 Lucy’s photo of Ichifuku-san and Ichitomi-san, Maiko of Pontocho, in October 2008.

How does one tell the difference between cosplay and real?  Not always easily at first.  The cosplay maiko may walk a little clumsily because it is not easy to walk in the high wooden okobo which maiko walk in.  The flawless make-up and hair of the genuine maiko will not be quite so perfect on the cosplay maiko.  The kimono may look as if it has seen better days.  An observant person may notice a wrist watch or rings on fingers.  Though having said this, one may come across girls who are quite convincing.

Cosplay maiko have a place in everyday Kyoto.  I am glad Kyoto gives girls the opportunity to become maiko, even just for a few hours.

There is a gentle poignancy to the sight of them watching their steps as they clack-clack beneath the weeping willows.

*See the ‘Work in Progress 2: Ichifuku-san’ page to see my drawing of her just before she became a geiko in 2010. 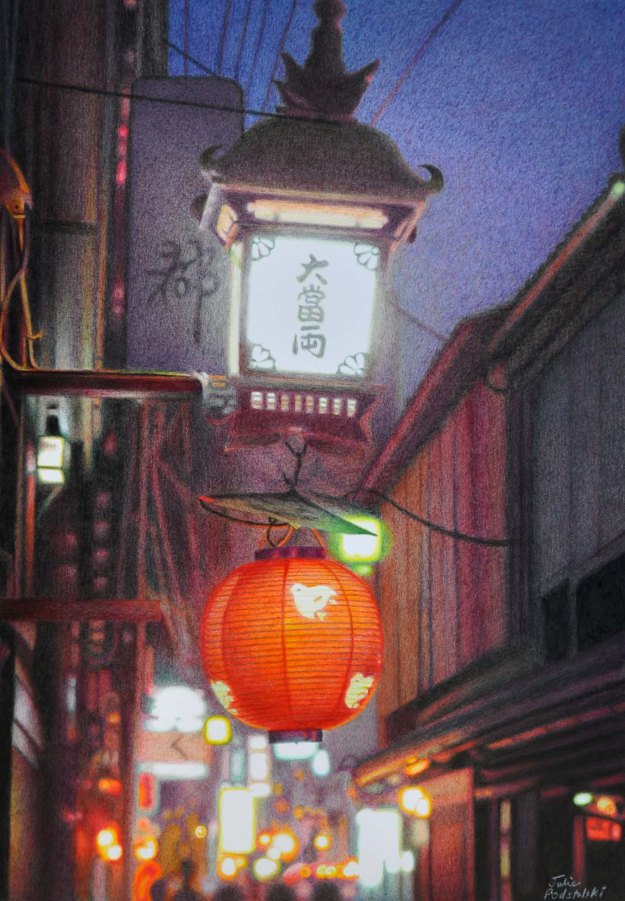 Remember the song?  “Here Comes the Night” was written by Bert Berns according to the blurb on the CD cover.  The version I am thinking of is David Bowie’s version on “Bowie Pin Ups”.  I’ve been playing “Pin Ups” while I’ve been drawing this; well, not all the time, but enough to make me associate the drawing with the song.

I have returned to an old motif of mine; Pontocho.  This is a narrow lane in Kyoto which is filled with restaurants, traditional tea houses, neon lights and sauntering people.  Turn into Pontocho lane from modern Shijo-dori and you turn into another age.  Or maybe I should say that it is timeless; modern and old simultaneously.  It is simply magic and so narrow that nothing wider than a two-wheeler may enter it.

Oh – and did I mention the smells?  Not yet.  Delicious smells of Japanese cooking permeate the area as well as scents of orchids placed outside the restaurants. (Or other flowers depending on the time of year.)   It is scrupulously clean; continuously the entrances to establishments are washed down by their fastidious  owners…(this IS Japan after all!)

If one is fortunate or just hangs round long enough, one will see a Maiko or Geiko flitting down the lane, always in a hurry, sometimes two together… or … extra good fortune… a group who … (now we are swooning)… are stopping to talk thereby creating great photo opportunities – and – maybe drawings will come out of this!

Oh – I have hung around Pontocho! And I will again – soon.  I will be in Kyoto later this month.  To get myself in the Return-to-Kyoto mood I decided to do this drawing.

Now it is finished I may just have ‘artist’s block’ as history shows that before a big trip (Japan and Europe in this case) I am too scatterbrained to be able to hold down a drawing.

Isn’t it peculiar that when one looks into the white lantern, the white glows far brighter than the sheet of paper itself – but it IS the paper itself.  By manipulating what surrounds the white, I electrify the white without even touching it.  There must be a metaphor for life here?!