Life is Beautiful
255 x 350 mm
My drawing of a wall I came across in the Marais district of Paris in 2012 containing street art by Zalez.

“So, life is disappointing, forget it!  In here life is beautiful, the girls are beautiful, even the orchestra is beautiful”, sings the Master of Ceremonies in the musical “Cabaret”.

I wonder if Zalez had “Cabaret” in mind when he composed this street art which I spotted in the 4th arrondissement in October, 2012?  The outfits of “Cabaret” heroine, Sally Bowles, and the figure on the wall are similar.  The written words “life is beautiful” supports the theory.  I reacquainted myself with the film soundtrack while I did my drawing of wall, downpipe and street art.  The songs loop around in my head. 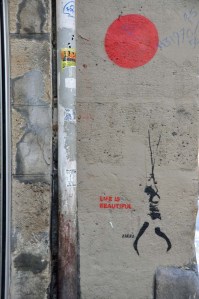 Here is the photo I took of Zalez’ street art.

Liza Minnelli as Sally Bowles in the film version of CABARET.

In 1930s pre-Weinmar Germany (the setting for “Cabaret”) life was precarious – as it still is in this example of Zalez’ street art.   The female figure dangles perilously off the balloon.  Is she in control?   In what state will she land?  She looks determined and apprehensive simultaneously.  Maybe she will land in enemy territory?

Perhaps Zalez is referencing “Le Ballon rouge” (1956 Oscar-winning film) by Albert Lamorisse?  The film, set in grim Ménilmontant, tells the story of friendship between a boy and a magical red balloon.  In the finale, Lamorisse’s boy hero (played by his son, Pascal) is swept skywards, pulled by a magnificent team of multi-coloured balloons. 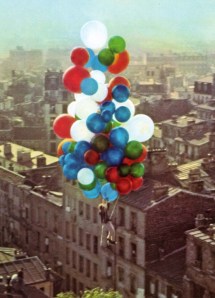 A still from A. Lamorisse’s film “The Red Balloon”.

So, what was Zalez thinking when he chose this piece of crumbling wall for the site of his artistic expression?  What was I thinking when I made a drawing of it?  In my case, I find truth in what is written and beauty in the stencil amid the decaying stone and rusty steel micro-scape.  “Even the orchestra is beautiful.”  Even the decay is beautiful.

White Noise
Drawing finished on 19th January 2014. The subject is a composite of street art, graffiti and tagging which I came across in Soho, New York.  360 x 545 mm.

I came across this random collective occurrence of unrelated things in New York last August.  Here is the first photo I took of it (which I showed in my New York blog post).

I asked this guy if I could photograph him and his dog in front of the wall.  Man and dog were most obliging.  I thought it might be my only chance at getting a shot at that wall.  One never knows if one is going to come across something again in an unfamiliar city.  I  didn’t even know what street I was on (I still don’t).  However a couple of days later while walking, I found myself at the same spot.  I photographed it a second time, also put it into my post and asked a question in the caption (photo and caption below). 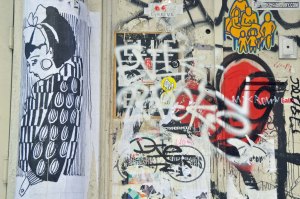 Art exhibit at MoMA or paste-up with mindless graffiti? Guess.

I asked myself something similar.  “Could this urban tangle of marks and torn paper have artistic merit?”  (Yes.)  And then… “Can I make it my art?”  Mulled it over.   Several months later and after seeing a lot of street art, graffiti and tagging in London I couldn’t bear it any more.  I HAD to make a drawing of it.

It is a totally ‘found’ image.  I found it and in drawing it I validate it!  I have read that Jasper Johns paints “…things seen, but not looked at.”  Who would look twice at this?  Me.  To the eye of this beholder it is an exciting and energetic mix of shapes, colours and textures.   It is also loud…in places; in fact, a juxtaposition of noise and quiet.  Robert Rauschenberg and Jasper Johns come to mind when I look at the wall.   Having been at MoMA the day before, I didn’t think this wall would be out of place among the abstract expressionism and pop art within.

Two weeks ago I drew the same paste-up figure (seen in a different location in Soho) in a drawing I named “Low“.  I see “Low” as similar to “Le Fugitif” – two more examples of “things seen but not looked at”.

“le fugitif” coloured pencil drawing, 29 x 30 cm, 2013. This is a drawing I made of somebody’s notice for his lost cat – who had fallen out of the window, according to what is written on the sign. 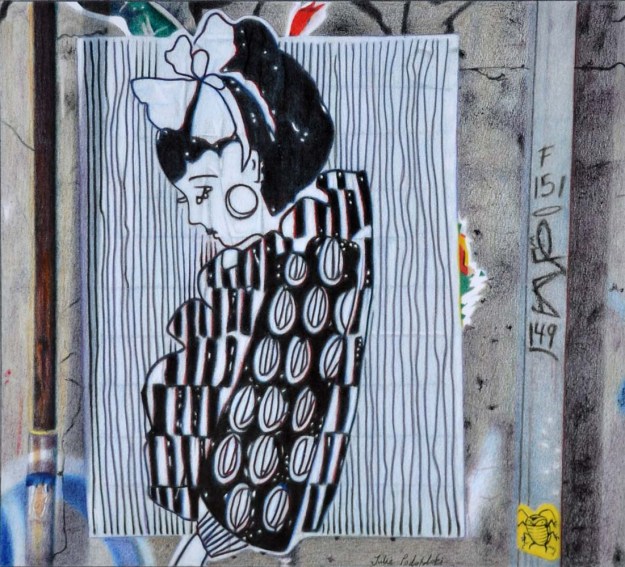 Having immersed myself in street art recently I am keen to make a few street art-related drawings.   “Low” is the first.  It is not just the art itself which interests me but its immediate surroundings.  Cracked concrete, rusty pipes, torn paper, tagging and filth all become part of my composition.  Elegance and random gunk rub up against one another making for a composition of contrasts.

I found this paste-up in an emtpy fenced-off lot in Soho, New York.  It was a little bit of poignancy within an area of derelict nothingness.   The little paste-up cockroach at the bottom right of the drawing was right at home here!

I named the drawing after David Bowie’s album “Low” which I was listening to while drawing this.  The melancholy sound was a perfect accompaniment to the vision.  This is drawn with coloured pencils, oil pastels and wax crayons.

You may remember that I drew an oystercatcher a couple of months ago.  I have reposted the drawing (below).

The subject of “Wings” and “Eye Catcher” is the same individual.  In my drawing “Eye Catcher” he was just about to open his beak to yawn.  The subsequent drawing reveals that after yawning he had a big stretch!   I was so happy that I caught this with my camera.   I started working on “Wings” before I went to London and finished it when I recovered from jetlag.  In fact it was completed only yesterday.

I am continuing to use oil pastels and wax crayons with my pencils; something which I started to do several drawings ago.   It is refreshing to be experimenting with new materials and combining them with pencils.  I stocked up on pastels, crayons and pencils at London Graphic Centre buying items unavailable in Australia.  What a beautiful display of Caran d’Ache I saw there.  I asked if I could take a photo so that I could put it in my blog.  (They said yes.)  I am giving you their website www.londongraphics.co.uk because you can buy their products online.

However I digress from “Wings”.  I hope you can tell from the fact that birds yawn and stretch when I am watching them that I am respectful and try not to bother them in the slightest by my presence.  I tried to be like that when I was photographing maiko and geisha as well.  I wanted to melt into the environment so that they wouldn’t even notice me.  It suits me to be invisible; watching but not watched.