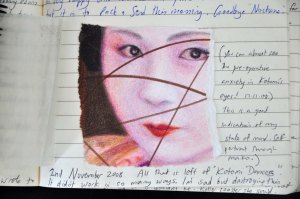 The above image shows an entry into my art journal with a piece of ripped up drawing glued to the page.  I have kept an art journal, by the way, since 1998.  It isn’t like a diary which is written in every day but I write whenever I feel like it.  (Currently I’ve just begun volume 11.)

I kept this relic of a drawing because I liked Kotomi’s eyes even though the drawing was no good.  The heavy scribbled lines over the drawing indicate my state of mind – ‘THAT’S IT!!!’ – as I killed the work with angry strokes before ripping it up.  (I usually furiously scribble over a picture before ripping.)

Art students may have the mistaken belief that professional artists don’t have failures.  Perhaps some don’t but I have many failures.  Even though I don’t like having them, they are important as they are a result of forging forward into difficult territory – in my opinion.

It is easy to be disheartened though and I find I can lose confidence when a work has gone into the rubbish bin.  However confidence returns after a small interval.

Coloured pencils are so labour intensive that I can be working on something for a couple of weeks before I realize it is a lost cause.

Another one bites the dust!

I saw the film “Hitchcock” today with Anthony Hopkins and Helen Mirren.  In the story, Alfred Hitchcock thinks “Psycho”, the film he is working on, is a failure.  He says to his wife, Alma, “I didn’t pull off the picture this time.  It just sits there, refusing to come to life…” -then  – “There’s no other way to say it…it’s stillborn.”

I couldn’t put it better myself.  That is exactly how it feels when a drawing is not working.  Those spoken words were so familiar to me that I had to scrabble for a pen and paper from my bag, while in the dark cinema, to write them down.

ps if you would like to see the five drawings of Kotomi which DID work, they are on the post Five Views of Kotomi