The Power of Glow

I have been playing with electricity.

In all three drawings I have employed a layer of white underneath the colours of the lanterns in order to create a ‘glow’ effect.

It was like a light-bulb moment when I had the idea to underlay with white.  “Power to the pencil” (to be sung to the tune of “Power to the People” by John Lennon).  “Right on.”

One of my favourite motifs is that of maiko or geiko walking away.  Why?  For one thing, I don’t like to photograph in people’s faces as they come towards me.  I am happier to let my subjects pass and then photograph as they disappear down the street.  The 13 drawings on this page are all examples of young ladies walking away.

Out and About on a Gion Afternoon
2009

I love to draw urban streets.  To put two figures in the composition is like inviting you, the viewer, to accompany them as they travel on foot.   Often there is a sense of intimacy, especially if the figures seem to be engaged in conversation.  In such a drawing I have just as much fun working on the urban-scape as the figures it contains.

Sometimes it is just a single figure.  The light might catch the gold fibre in her obi.  How I love that luxuriant piece of cloth though its complicated patterns are a challenge and are apt to drive me crazy.  In the case of kimono ensembles, a maiko or geiko is just as splendid (if not more so) seen from behind as in front.

In “A Stroll Before Dusk” below, you may be able to see that the two figures are tourists dressing up as maiko.  How can you tell?  Because they don’t have the natural grace and poise of real maiko.  They walk a little awkwardly and the kimono are rather haphazard too.  Some people who follow maiko and geiko on-line take offence at women dressing up and parading in the streets of Kyoto – “Imposters!” – but I don’t mind ‘cos-play’ maiko  at all.  Why shouldn’t they have fun?

You can compare the figures in “Diamonds” with those from “A Stroll Before Dusk”.  The three genuine maiko almost float as they walk. 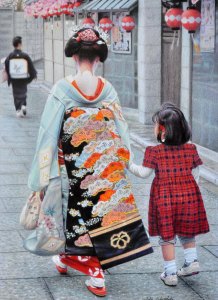 I caught a moment in “Surprise!” where two maiko have rounded a corner to be faced with a wall of photographers.  There is no turning back.  They are like rabbits in headlights. 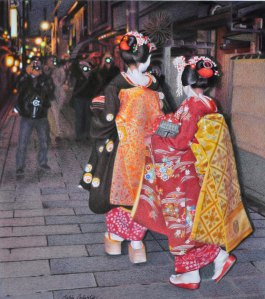 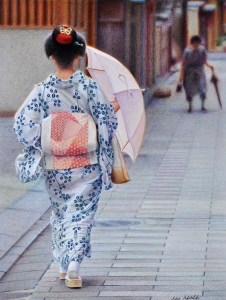 Next week I will be back in Kyoto.    You will find me on a street corner in Gion, Pontocho, Kamishichiken or Miyagawacho humming to myself, “Just walk away, Renée/You  won’t see me follow you back home”.  I always liked that song.

In 2018 a couple walking away from me still gets drawn from time to time. 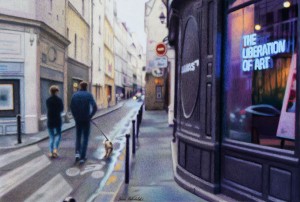 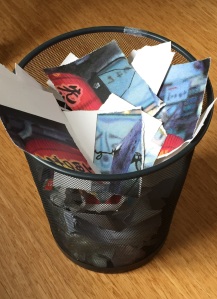 Uh oh!  How did it come to this?   A couple of hours ago it had been intact.

I had been completely happy with this drawing.  After I finished it I called it “Interplay” and filed it away.   My plan was to do a small series of lanterns, “Interplay” being the first.

When I did the second drawing in the set, “Minamiza Lantern” I remembered something I used to do several years ago.  I used to put a layer of white pencil underneath a colour which I wanted to glow.  I don’t know why I had forgotten this or why the memory of it came back.  In any case, I put white under the lantern and the blue fabric before I added colour coats.  The result was a very bright picture.   Suddenly the lantern in “Interplay” was flat and dull by comparison.

I immediately set to work on a third lantern drawing.  Once again I put white under the colours which I wanted to glow with electricity.  This drawing is called “Paper and Neon”. When I put this new drawing next to “Minamiza Lantern”, the two of them looked bold and bright together.  They are the first two players in a new team…Team Undercoat White! 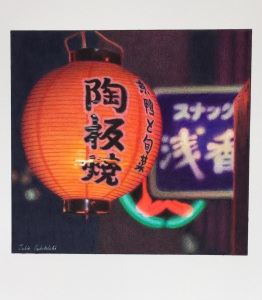 Seeing the lanterns in both “Minamiza Lantern” and “Paper and Neon”, I knew even more that “Interplay” was no good.  I felt that I had taken a step up with the new drawings. When I looked back down over my shoulder, I no longer liked the drawing that was left behind on the lower step.  So this afternoon I did the deed – rip, rip, rip.  I did it without regret.  Quality control.

“Interplay” served its purpose as a bridge of sorts.  It was part of a learning curve which has yielded good results therefore it wasn’t a waste of time.  Tomorrow I will begin the next lantern…with white.

NB: The above photos were taken with my I-phone as I STILL don’t have a computer!  My new computer has been lost somewhere between Sydney and Perth it transpires.

A photo of the drawing “Minamiza Lantern” taken with my Nikon D90 camera.