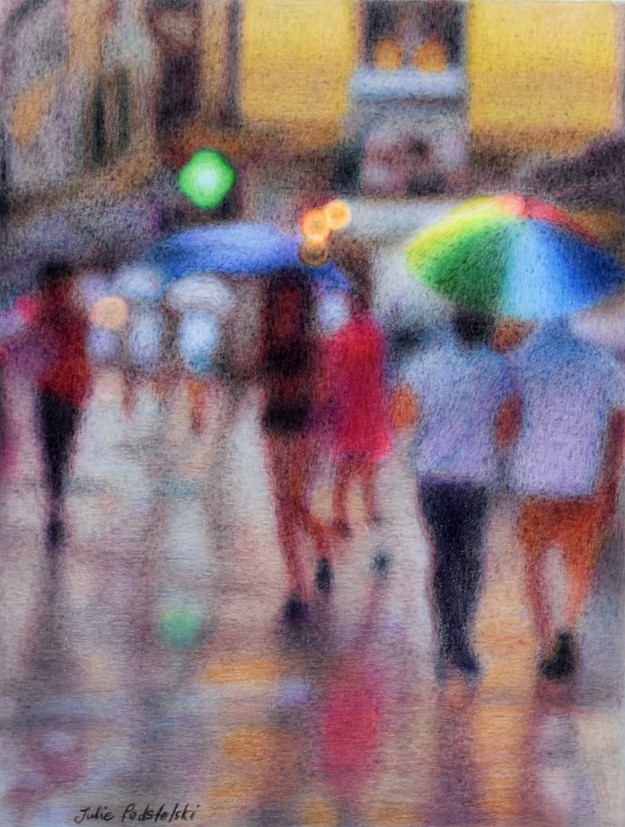 All the colours run into a kaleidoscopic blur when a thunderstorm strikes Verona.  Those with umbrellas exercise their right to dawdle while those without hurry forth.  We are objects within a watercolour as forms melt and merge in a gush of summer rain.

The small pair side by side… 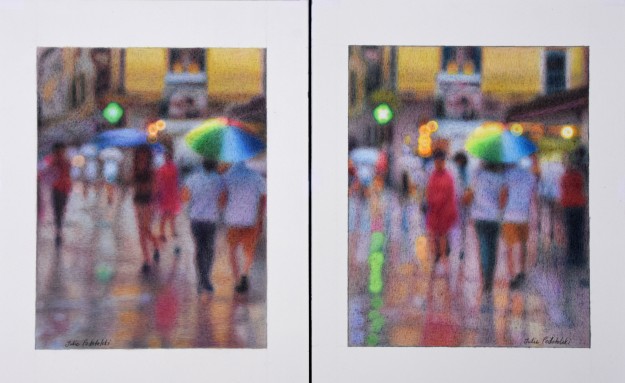 In November 2020 I drew another version of “Summer Rain 2”.  This latest version will be exhibited in my April 2021 exhibition “An Italian Dream”.  (The former two Summer Rain drawings have already found new homes.)

When I was 11 years old my Form 1 class was set an assignment.  We had to interview one or other of our parents about their childhoods and write in some form what life was like back then.  I came across my composition last night as I perused the pages of  “FABRIC OF A FAMILY – The family history and background of Mary and Jerzy Podstolski” by my sister, Jeannie Beauchamp.   (If Jeannie hadn’t added my words to the family history they’d be totally lost.)

I interviewed Mum for the project at home in Wellington, New Zealand, in 1971.  Mum was born in 1920 in Hucknall, England.  If she was alive today she’d be turning 99 on 25 October 2019 while I will be turning 60 in a few days.   And so, to celebrate two young lives, and history in general, here is my piece.

Before I start I’ll let you know that Mum was born in a small town that was part of Nottingham, England.

In the evenings Mum would read a great deal.  She would sometimes play outside with a ball and often she would play cricket in the back yard.  She would go for walks, write letters to her friend (who lived next door), knit and listen to the radio.

Mum was expected to do no work as her grandma did it all.

Mum was disciplined a great deal by her grandmother and she was never allowed to go for walks by herself.

Mum used to go to the sea a lot on holidays.  She went to Skegness, Mablethorpe and Cleethorpes.  They would only stay for about four days.

Bournemouth holiday snap. Mum is the little girl 4th from the left in front.  1924.

In the weekends Mum’s parents would be busy in the shop so Mum could never go out.  Sometimes they would go for long walks in the country.  On Sunday Mum would go to Sunday School, and in the afternoon they would have visitors or visit someone else.

Mum got sixpence a week pocket money, and in the summer on Saturdays she would be allowed an ice cream which one of our relations made.  She wasn’t allowed to get ice cream from anywhere else other than her relation because in those days people made their own ice cream and sold it and you never knew what they put in it.  People only made ice cream on Saturdays and on Sundays none of the shops were open.

In Mum’s area they usually travelled by taxi, car or bus.  If they were going for a long holiday they would go by train.  To go to a beach they would go by train because the nearest beach was about 200 miles away as they lived in the Midlands.  Mum’s parents did not have a car but they lived with Mum’s grandmother who owned half a car.  Mum’s aunt (Grandmother’s daughter) owned the ofther half.  Often Mum would go out in Grandmother’s car with the family, but since no-one could drive, they hired a man to drive for them. 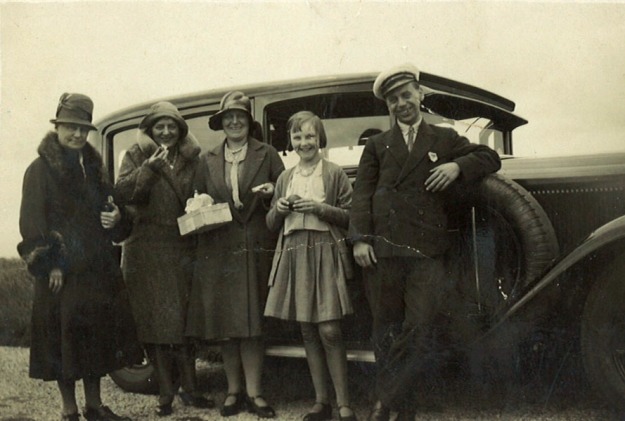 Mum needed no transport to get to school as her school was almost across the road from where she lived, but if she had needed transport, she would have been lucky, because there was a bus stop right by her front door step.

The mail would be delivered twice a day, once in the morning and once in the afternoon.  It’s much better in England because the letterbox is in the door so no-one can steal your mail.

Mum lived right near an aerodrome and she heard planes fly over a lot but in those days there were no passenger services.

All houses were made of brick but mostly red brick.  Most young people lived in rented houses.  The suburbs which were being developed were mainly Linby, Papplewick, and Bestwood estate.

Mum had electricity.  She had never heard of vacuum cleaners.  Instead she had an ewbank sweeper which she pushed up and down the floor.  She didn’t have a washing machine but a tub.  Mum had two irons which were called sad irons.  While one was being used, the other sat on the gas element, and when the one which was being used got cool, they would be changed around.  They had a heater and Mum’s old-fashioned grandfather used to think it was the same as a fire so he would throw rubbish into it hoping it would burn.

Cake mixers had not been heard of, neither had electric blankets or fridges.  Instead they put their food in the cellar or meat safe.  Hot water bottles had been invented and so had treadle sewing machines.  Mum’s mother had one because she was a dressmaker.  Mum did not have a toaster but she toasted bread on a toasting fork by the fire.  Later on they had a radio.

In Mum’s day there was a lot of difference between the rich and the poor.

Mum’s school was as big as ours if not bigger.  There was not a shortage of teachers, in fact lots were out of work.  The play area of the school was only a concrete playground.

The programme included maths, country dancing, physical education, composition, sewing and cookery, and housewifery.  The system was much better than now because in housewifery they taught you to keep your house tidy, wash windows, iron etc.

The schools were mainly public like today.  Anyway Mum never went to college.  She left school at 14 years old.  Lastly the schools were very strict.

Work was very difficult to find and jobs were easily lost.

The pay was all right but not very good to miners.  Some miners who had big families to look after got a pay of 16 shillings a week.  Transport was reliable to and from work.  The main public job which was available was mining as Hucknall is a mining town.  The hours of work were 8 hours a day, 9 o’clock to 5 o’clock.

Working conditions were not as comfortable as now.

There was no rationing during the Depression in England.

Work was always hard to get in England because of the population, and it still is.  Lots of people beg on London’s streets.  Something you won’t see in Wellington.

Everyday clothing was just the same as now except the dresses were longer and for women no trousers were allowed.  Mum wore just ordinary clothes to school.  She didn’t have a uniform.  It was easy for Mum to get clothes because her mother was a dressmaker.

Mum with her mother, Ada, directly behind her.

For a lot of poor people clothes would have to last a long time because people could not afford new clothes very often.

Wet weather wear did differ from today.  Coats were not waterproof, and there was no such thing as plastic.

Shoes mostly had buckles for women, and for men there were lace-ups.  I don’t think buckles were on men’s shoes like today.  Wellington boots were worn in wet weather.

Well – it ends rather abruptly doesn’t it.  Either I hadn’t learn to finish off essays yet or the last page went missing.  In any case, I think the teacher liked it. 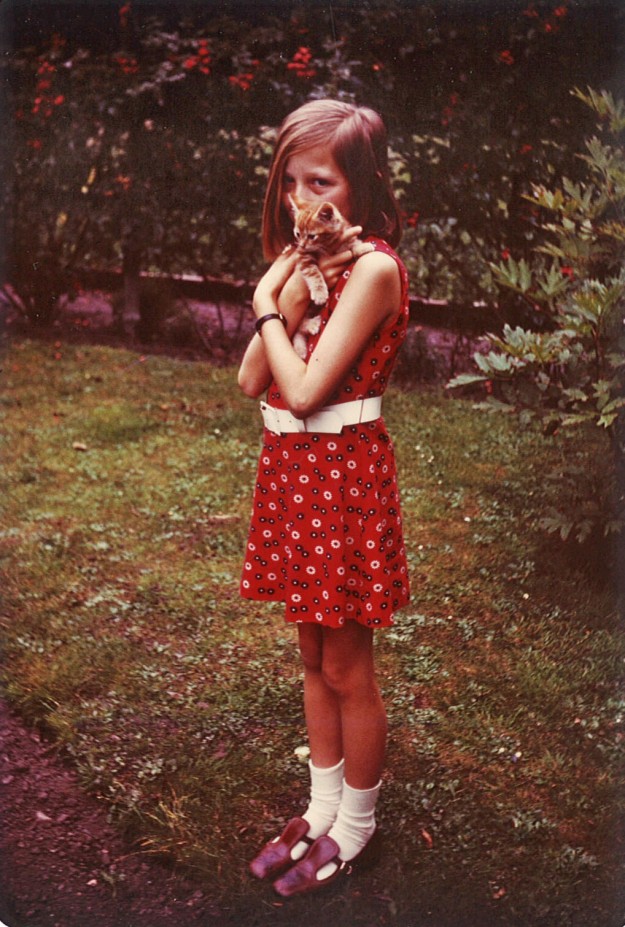 The author at the approximate time of writing this – aged 11.

Mum and I at a wedding reception in New Plymouth, 1973.