I started “Jewel” three times on three different papers.  Talk about obstinate; I wouldn’t give up.  The first attempt was on a paper which I thought was Stonehenge but it turned out not to be.  The second attempt was on Fabriano Artistico.  Horrors.  I couldn’t layer the way I wanted and I ended up chucking it.  Third time (I had to be pretty sure I wanted to draw this by now) was on Velin BFK Rives.  After the Artistico it was such a relief to be back on the Rives even though it was only my second drawing using it.

What do I think of Rives?  I feel that it is a more challenging paper to work on than Pescia. However it is worth the extra effort.   Colours and textures both seem richer on Rives than on Pescia.  I miss the ease of Pescia however I admire the Rives look. It is a paper that refuses to be merely a passive support.   It demands to actively participate, its heavy texture bosses the pencil around.  “Here I am!” states Velin BFK Rives (how French).

When I showed daughter, Lucy, this drawing she said, “It’s a jewel”.  As I had been playing with the word as a title anyway, at that moment “Jewel” was set in stone.  My aim had been to convey Satsuki-san as a jewel in her red, black and gold sakko outfit.  I also wanted the illuminations in the plate glass windows across the road to play their part – to add to the warmth and drama of Satsuki-san’s ensemble.

So what is sakko?  It is a period (about a fortnight) of transition between being a maiko and becoming a geiko.  I quote Komomo-san from her book “A Geisha’s Journey: My Life as a Kyoto Apprentice”- “A maiko is supposed to look cute and childish, whereas a geiko should look elegant and grown-up, and the sakko is the period during which we make that change.”

I travelled to Kyoto in February just to see Satsuki-san’s debut as geiko.  There will, without doubt, be more drawings of her yet.  She is a muse to many photographers as well as to this Australasian artist.

My photo of Satsuki-san earlier that same day.

The images below show the progress of the drawing.  The first three are taken with my I-phone and the last with my Nikon D90 – which explains the difference in image quality. 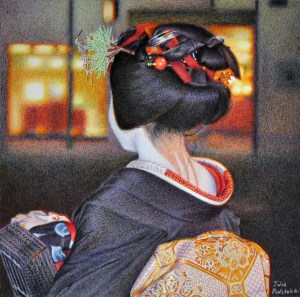 Exactly one week ago I was showing Ann Kullberg* around Kings Park.  This beautiful park is Perth’s botanic garden.  As we walked around, I told her that I had done a drawing of the spring wild flower display in 2012.  In fact, I said, an image of the drawing was on my business card.  I fished one of my business cards out of my wallet to show her.  She looked at it and said, “But that’s a photo”.  I assured her that it wasn’t.  I told her I would show her the drawing on a blog post.  So here it is.  “Ann – this is not a photo but quite a large drawing.”

In 2012 I thought that I might have found a new subject in flowers.  However it drove me crazy drawing this due to the complicated details.  So I haven’t followed it up with any more botanical drawings.  I love plants but I don’t have the calling to make art of them. I’m happy merely to be an observer of their elegance without wanting to reproduce them with pencils.

Ann Kullberg photographs the view from a Japanese-style pedestrian bridge in Kings Park.

After our morning in Kings Park, we drove to Point Walter; another gorgeous area in my neighbourhood.  Later that evening I drove Ann to the airport.   It is incredible to think that all this was only a week ago.  Now I’m still here while Ann is teaching coloured pencils on a cruise around Alaska.

*Ann Kullberg is an American artist, teacher, and writer of magazines and books on coloured pencils.  She held two colour pencil weekend workshops in Perth, Western Australia.  It was my privilege to host her.

Belinda Lindhardt, artist, teacher and founder of Australian and New Zealand Coloured Pencil Group came over from New South Wales for the second workshop.  This was a time to learn from one another and exchange ideas. 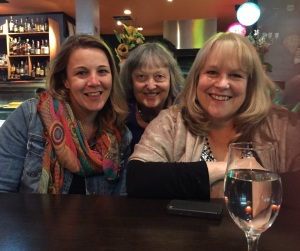 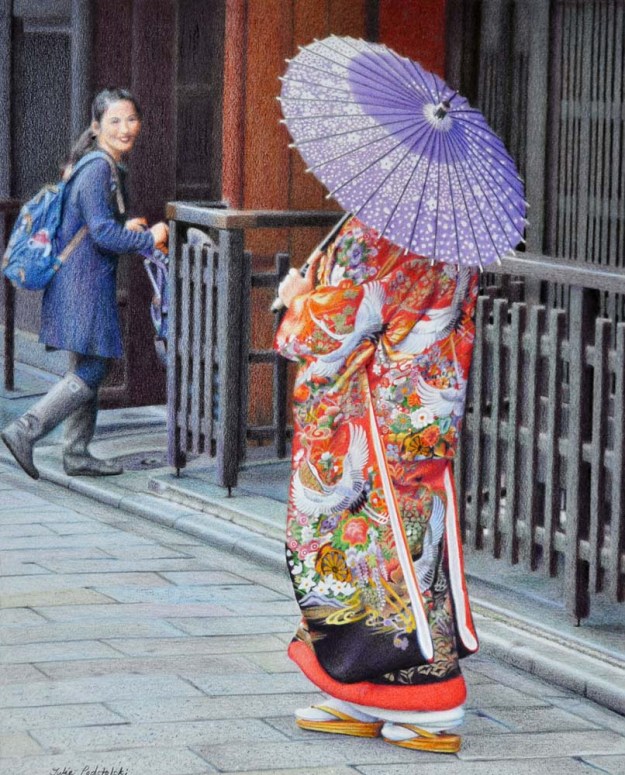 Bliss
A drawing with Luminance and Holbein pencils plus some Caran d’Ache Neopastels on Velin BFK Rives paper.
410 x 510 mm. May 2015.

Matthew came up with the word “Bliss” when we were discussing my latest drawing.   I pounced on it – as a perfect title.  What could “Bliss” be referring to?  Perhaps marital bliss or the artist’s bliss (at witnessing and then drawing this scene).  Or it could be the benevolent smile of the onlooker as she walks near the bride, or the bride’s rapture at wearing such an outfit and being the centre of attention.

It was good fortune which allowed me to capture the source photo in Gion, Kyoto.  I’m sure I didn’t even see the young woman in the coat and boots pushing the stroller or her encouraging smile to the bride.  I was trying to capture the bride before she folded down her janome (oiled parasol) and moved on.  I only had seconds to spare as I was one of the many photographers following the erikae walk of Satsuki-san.  Photographing the bride was a rushed detour from my main path.

The outfit our bride wears is called an iro-uchikake.  It is a splendid robe which is worn over the white bridal kimono.   I adored drawing its exotic bright patterns and made every stroke reverentially.  Iro-uchikake are so expensive that brides merely hire them for the day and even then it is a huge cost.

This was my first drawing on Velin BFK Rives paper after 14 years of using only Magnani Pescia.  During my first tentative pencil marks I felt like the bride – unsure of the new reality.  But some time into the drawing I became more confident, as if I was now the young mother in the composition.   Most certainly it feels different layering pencil on BFK Rives than on Pescia. Would I use BFK Rives again? Yes.  The paper encourages the colours to sing out, perhaps even more than Pescia.  It takes some adjusting to, and persevering with – come to think of it – as does marriage.

Note:  I am showing the photo I worked from (below) so that you can see how I edited out the groom.  The shape of his janome did not add to the quality of the composition – in fact it subtracted from it.  Better if I took him out completely.

My source photo for “Bliss”