Here I am back at rue de l’Echaudé.  I have walked a little further down the street than in my last drawing done in April (see below).  Now I am nearly at the corner of rue Jacob.  Saint Sulpice looms nearer than it did in my last streetscape.  The photos sourced for these drawings were taken minutes from one another.

Rue de l’Echaudé
April 2014. Just to remind you – here is the last drawing I did of this street.

I borrowed the title of George Gershwin’s musical composition for my drawing.  I also listened to it quite often during the drawing process.  I love the music of Gershwin.  “Rhapsody in Blue” and “An American in Paris” are two of my favourite pieces of music and have been for as long as I can remember.  I have just read on line that Ira Gershwin suggested the title “Rhapsody in Blue” to his brother after visiting an exhibition of James McNeill Whistler’s paintings.  There he saw titles like “Nocturne in Black and Gold” and “Arrangement in Grey and Black”.   So – painting titles influenced concerto title which in turn became my drawing title.  Thanks James, Ira and George!

Perhaps this is my last drawing of rue de l’Echaudé.  I wasn’t quite ready to call it quits after I finished my April rendition of it.  However now I feel that my appetite for drawing it has been satisfied.

The walls on either side of the drawing are very dark to direct your eyes where I want them to go, (rather like the role of black theatre curtains).  You are swept along the light-reflecting lane towards Saint Sulpice tower where, if you are a spirit (or a pigeon) you may effortlessly ascend to the parapet.  When I die, I will perform this aerobatic manoeuvre.  Till then, I’ll just imagine it.

The Fleeting and the Transient

Dichotomy
A coloured pencil drawing of Koai exiting a convenience store (with Makiko still at the counter). Drawn in 2010, 530 x 640 mm.

Dichotomy:  a division into two classes, parts etc, especially of things that are opposed or entirely different; a sharp or paradoxical contrast. “Dichotomy” became the title of one of the biggest coloured pencil drawings I have ever drawn.  At 530 x 640 mm, that is a lot of space to fill with the point of a pencil.

The story began in December 2009.  I was in Kyoto and thanks to my friend, M, who I had only met the day before, I found out that the annual kabuki performances were on at Minami-za Theatre.  All the maiko and geiko of Kyoto were invited to the performances which meant an absolute field day for photographers as each day for five days one could be sure of seeing maiko and geiko walking to and from the theatre.  (M, I will always be grateful that you told me about this!)

A photo I took just outside the entrance of Minami-za theatre. You get an idea from this of the number of photographers trying to get good photos.  My friend, M, is actually in this shot.

If one waited with the pile of photographers then any photos one took had photographers’ heads in.  No good.  I cottoned on to this fact and waited further up the street.  And then a golden opportunity:  two geiko nipped into a convenience store.  All I had to do was wait for them to come out.  But it was a very busy street with pedestrians going back and forth every second.  Please please could nobody come past at the crucial moment.  I waited and waited – silently asking for a clear moment at the crucial time.

Eventually – here she comes.  The doors slid open.  Out came Koai.  Click.  JOY JOY JOY.  No pedestrians blocked my shot.  I knew at that very instant that this would be a drawing.

Later that day I saw the words, “The Fleeting and the Transient” advertising an art exhibition at Kyoto Museum of Modern Art.  I wrote in my journal, “I think my work is about the fleeting and the transient too”.

It took months before I gathered up the courage to attempt to draw this.  It was so complicated and I wrote in my journal that I nearly gave up on it soon after I started.  Yet I so believed in the idea of it; the visual clash between traditional and modern Kyoto, that I pushed through fear of failure.

Here is an entry from my journal on 9th March 2010 explaining one of the battles: “What turned out to be one of the hardest parts was the supermarket ceiling.  It really went to mud but somehow I think I’ve weaseled my way out of catastrophe.  Matt said Koai was on the same plane as the inside of the store so I had to bring her forward.  This meant pushing the inside panel back by darkening it.  That’s when I turned the ceiling to mud.  Matt said I’d be able to fix it by applying grey and he was pretty much correct.”  [My civil engineer husband has an uncanny sense for solving art problems.]

In 2011 the drawing won the City of Belmont “Open Acquisitive” section of their annual art award and now it is part of their public art collection.  Perseverance rewarded – the fleeting and the transient was captured and given permanence in a public space. 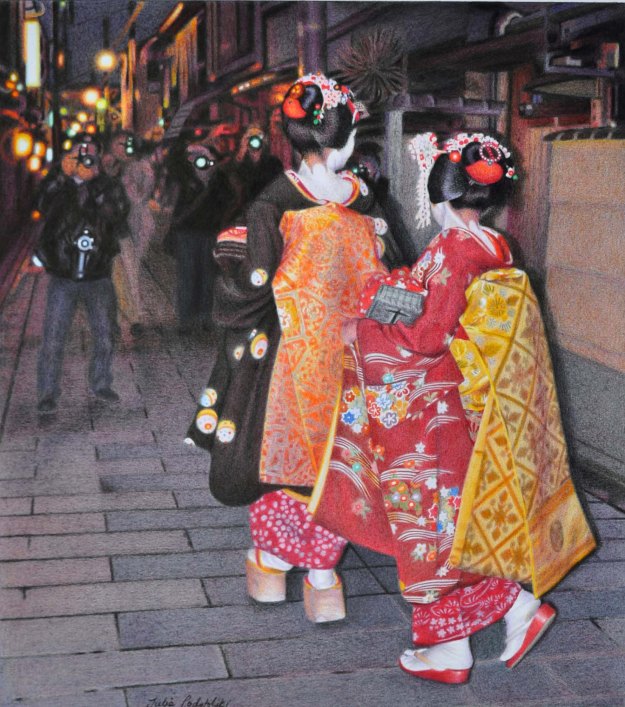 Surprise!
Coloured pencil drawing from 2011. 360 x 410 mm.
Two maiko round a corner to come face to face with waiting photographers.

Last week I wrote about the wonderful time I had photographing Katsuyuki during her erikae in my post Daughter of Kyoto.

This week I would like to show another drawing I made from that particular trip to Kyoto in February 2011.  This drawing describes something like an ambush which these two maiko walked into.  As they rounded a corner in Miyagawa-cho, Kanamitsu and Kimihiro almost collided with a wall of photographers.   I was in a position to see them coming so I caught the moment – bam!  Of course after the cameras flashed, the photographers divided like the Red Sea and the two maiko continued on through.  Their pace was, as usual, very fast.  Maiko and geiko remind one of the White Rabbit in “Alice in Wonderland” –  always in a hurry.

In fact that night was rather like a chapter from “Alice in Wonderland”.  It was February 3rd – “Setsubun” – a celebration of the seasonal change from winter to spring.   People were dressed up as all sorts of mythological and magical beings – rather like a huge fancy dress party.  Teams of loudly chanting priests marched through Gion tossing beans and handing out packets of beans – to symbolize driving away evil spirits and encouraging good fortune.  It was an extremely merry (and quite touching) night.  So of course there were many photographers out to record events.  I usually find Kyoto otherworldly but this night was beyond the beyond!

This self-appointed Alice is heading back to Wonderland in just under three weeks.  I miss Kyoto and therefore it is time for another trip.  A British man on the radio today was explaining to his interviewer why he was compelled to return to Spain every so often.  He said, “I have to keep returning.  It’s rather like a soap opera.  I want to know what they’ve been getting up to while I’ve been away”.   I know exactly what he means!