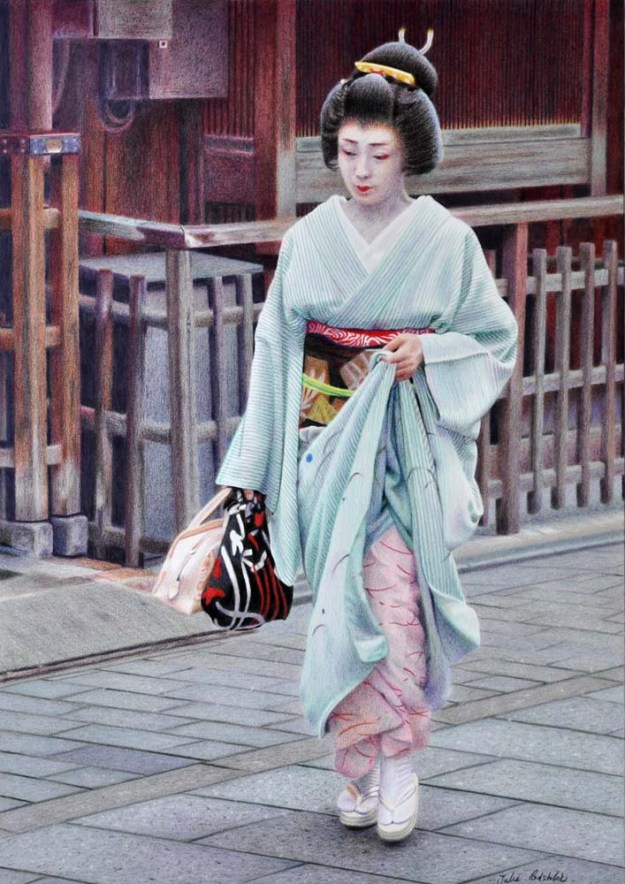 While every maiko and geiko must face public scrutiny and insatiable curiosity as she walks through the streets of Kyoto, at least her thoughts remain private.  She will be looked up and down, photographed, approached.  “May I take your photo?”  or “Can I have my photograph taken with you?”  In awful cases, she is run after by excited tourists or flashed in the face by cameras held at close range.  She puts on her inscrutable face and walks forward.  What else can she do?

In our western world which has no secrets any more – how refreshing to be pulled backward in time to a world of sensuous mystery.  Nuance, finesse, a gentle hint – where are these feminine elements in our society?  We are bombarded with women who reveal nearly all and I find that so incredibly boring.  But fabric floating around a figure, moving with every step – now THAT is fascination.

So how can people really be blamed for wanting to look upon such a vision of elegance?

“I do not want to invade your thoughts, Makiko-san.  I have photographed you from far enough away so that I am not in your space.  There is nothing I would rather render in pencil than you and your environment – from the traditional wooden tea houses to your facial expression, swishing fabric and light step.”

And so I have spent the last few weeks drawing “Private Thoughts” – I hope, with no dishonour to my introspective subject.

What a slow process coloured pencil work is.  One gets into a zen-like trance when working away repeating stroke after stroke after stroke.  As I am miles away from completing “Private Thoughts”, my current drawing, I have decided to show where it is at today.

It is a drawing of restraint and subtlety.  The kimono Makiko wears is very quiet, as is her surrounding of wood and stone.  I am entranced by the verticals of the wooden slats ‘talking’ to the vertical stripes of Makiko’s kimono.

I am fascinated by repeating patterns.  My last two drawings also lull me into the peace of repetitive shapes – especially in the street paving – I refer to “Diamonds” and “Step by Step”

True, to work on paving stones and wooden slats is monotonous but there is something to be gained – a kind of inner tranquility.  Perhaps a Japanese aesthetic is seeping into my bones. I hope so.

November has two dates very close to home to celebrate.  The first date is the 9th.  My husband and life-long partner, Matthew, will be 56 tomorrow.  The second important date is the 12th November.  We remember each 12th of November as the day Matthew received a “second life”.

Since 1993 when Matthew was around 34, he knew that he had a kidney condition which would eventually result in zero kidney function.  The condition was caught early so medication was able to slow the disease process as much as possible, however by 2007 Matthew was weak and ill so the time came to start dialysis.  He began dialysis just before Christmas, 2007.

Matthew hooked up to a dialysis machine in 2008.

Dialysis means being hooked up to a machine (a mechanical kidney) at least three times a week for five hours at a time.  There are many variations on this but I’m keeping it simple. Your blood passes through the machine many times during each session and is cleaned; wastes being removed.  You may not drink more than a litre of fluid every 24 hours, taking into account the fluid which is already in food.  So you always have a craving thirst 24/7 which is never satisfied.  It also means not being able to urinate any more.  Waste fluids are taken care of with dialysis. You are on an extremely restricted diet and you feel tired and ill most of the time.  Not to mention the complications…which I won’t.  It is heart-wrenching to witness.

Waiting lists for kidney transplants are years long.  I wanted to donate my kidney to Matt but my blood group was A and his was B which meant I couldn’t.   We joined a brand new   “paired kidney exchange program” started by Professor Paolo Ferrari, Director of the West Australian Kidney Exchange and Head of Renal Department at Fremantle Hospital.   Prof. Ferrari established the program in W.A. in October 2007 and led a team of transplant physicians and surgeons in performing the first paired kidney transplant in November 2008.   The exchange of kidneys was previously illegal in Western Australia but Prof. Ferrari lobbied the government and the amendment was changed in 2007.

I declared that I wanted to be part of the program; that is, I wanted to be able to donate my kidney to an anonymous person with an A blood type so that Matthew, in turn, could receive a kidney from another anonymous person with B blood.  For me this meant many months of “work-up” to see that I was mentally and physically able to cope with letting go of one of my kidneys.  Tests, tests, tests.  With every hospital visit and test I felt sure that the operations would go ahead.  For Matthew in the dialysis chair, he was afraid to put too much faith into such a modern day miracle.  He thought he would have to wait for a deceased person’s kidney to become available…if it ever did.  We simply had to wait and hope.

My journal entry of 21st August 2008:  “Matt emailed Paolo to tell him we were starting training for home dialysis [as opposed to having dialysis in a medical centre].  Paolo rang Matt straight away and said he didn’t want us to start training as he had a couple for us…for a transplant!  Seems we will have our transplants in November!  We are seeing Paolo tomorrow at 9 a.m.  Can’t wait!”

It turned out that we would be part of SIX operations involving three donors and three recipients.  None of us would meet one another.  It was all done in total confidentiality. (However I can say that the donors were women and the recipients were men.)  On 11th and 12th November the operations took place at Sir Charles Gairdner Hospital.  Here is a description from a newspaper: “The WA trial has already gone further by achieving an Australian-first three-way domino chain of transplants.  It started with an altruistic stranger who offered to donate a kidney to someone in need.  His wife then donated one of her kidneys to another man on the paired exchanged program [Matt], and his wife [me] did the same for another man.  The chain ended there only because the third recipient did not have a partner able to donate a kidney, but potentially it could go much further.”

This photo was taken by daughter, Alicia, five days after our operations. I had been discharged from hospital three days after my op. Here I was visiting Matthew who was still an in-patient. He went home after 8 days.

In 2009 the program expanded from West Australian to national.  Can you believe that kidneys from live donors are winging their way across Australia to reach their recipients in different states?  Imagine the logistics.  And all this was established, and is still run, by Prof Ferrari and Claudia Woodroffe, Australian Kidney Transplant (AKX) Coordinator at Fremantle Hospital.  (Claudia is a very dear friend.)

Matt and I are just two people whose lives have been changed by Paolo and his team.   Quote from “The Australian” newspaper – 4th April 2009, “Matthew and Julie Clements have nothing but praise for Ferrari, whom they call “Saint Paolo”.

Indeed, Paolo has taken Matthew (and so many other people across Australia) off death row and allowed them to have fulfilling and healthy Second Lives.  We are so fortunate to have been part of this scheme.

Professor Ferrari with us in a photo taken by Andy Tyndall from The Weekend Australian: 4-5 April 2009. The story was “Chain of goodwill saves lives”.

Matthew in 2014.
This is Second Life…six years post-op and many happy returns.

8th June 2015: Queen’s Birthday Honours List.  Professor Paolo FERRARI has been awarded Officer of the Order of Australia “For distinguished service to medicine in the discipline of nephrology, as a clinician scientist, to the establishment of innovative renal transplantation programs, and to medical education”.