“Photorealism at the Millennium” by Louis K. Meisel with Linda Chase.

There still seems to be an argument about the merits of realism.  Why draw or paint something which looks superreal or photographic?  Some people love it.  The more a work looks photographic, the more it is successful in some people’s eyes.  One gets the amazed comment “It looks JUST like a photo!”  Conversely, other people just shake their heads sadly.  ‘Why would you bother?  Just take a photo; what is the point?’  I can understand both reactions – awe and disdain.   The argument continues in some of the artist forums I participate in.  Recent comments persuaded me to write this post.

I became aware of Photorealism in 1979.  When I was at artschool, my painting tutor, Ted Bracey, saw that I wanted to paint in a realistic way.  He said to me “If you’re going to do realism, you might as well do Photorealism.”  Then he had to show me what it was because I wasn’t aware of it.  (I wasn’t aware of anything when I was 20!)

“Black and White Cow” oil on canvas board, 1979. My first Photorealist attempt.

I dutifully took up the challenge to paint in a Photorealistic way under Ted Bracey’s tutorship.  My “Black and White Cow” and “Coloured Cow” were the results of that year. 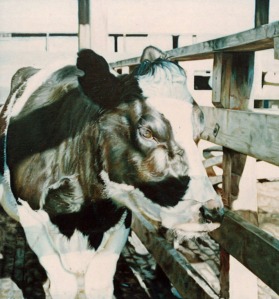 The next year, 1980, I had a tutor who hated Photorealism, Don Peebles.  In one of his lectures he derided it, talking of artists who painted in this hyperrealistic way but couldn’t draw a stroke freehand.  Thanks Don!  I remember your words.  He was talking in a general sense but I felt that he was meaning me (persecution complex) as I was the only student working realistically in the group.   That year I painted “Laughing Clowns”.  He gave me a B- and said I took too long over it.  Both Ted and Don have flown to the great art school in the sky since then. 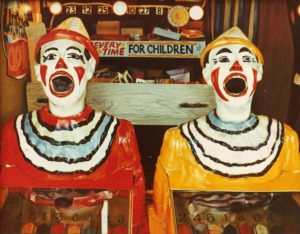 Maybe I did take too long over “Laughing Clowns”?

I don’t have a philosophical argument for why I draw/paint the way I do though I need to observe and comment on the world I see.  This is the method I have for doing it, with camera as well as pencils or paint.  I love doing it and that is the bottom line.

“Through the Looking Glass” – 2004. Coloured pencils. Fascinated with reflections.  You can see my ‘shadow reflection’ taking the photo.

In 2005 I found the book “Photorealism at the Millennium” by Louis K. Meisel with Linda Chase.  ISBN 0-8109-3483-3 published 2002, Harry N. Abrams, Inc.  The book reminds me that I have an artistic ‘home base’, though in true Photorealism there is not supposed to be any sign of paint or pencil marks.  The work should betray nothing of the artist’s tools.  My realism, then, while it falls under that general umbrella, is not exactly 100% Photorealism.

Linda Chase writes far better than I can, what the Photorealist artist is about.  Here is part of the conclusion of her essay “The Not-So-Innocent Eye: Photorealism in Context” (text on page 22 of “Photorealism at the Millennium”) :-

“Where does the art lie?  It lies in the artist’s mind and eye and hand.  In a keen and canny perception of the world around us, in a deft choice of subject matter, in the composing and taking of the photograph, and then in the decision to paint one particular image out of the hundreds of photographs taken.  For a photographer, this would be the end of the process, but for the Photorealist it is just the beginning.  It is in the process of then painstakingly transcribing the image, with the myriad decisions this entails, both conscious and intuitive, that the artist’s sensibility inevitably and magically transforms the image into something that is distinctly his or her own: objective yet personal, real yet more than real.”

“Photorealist paintings proclaim unequivocally the value of clear-eyed observation, of sustained effort, and above all of the act of painting itself.  Revealing hidden beauty in even the most mundane aspects of the world around us, they open our eyes to wonder.  Far from purveying cheap thrills for the masses or sleight-of-hand tricks (accusations hurled by disgruntled critics in the early years), the best Photorealist paintings provide us with awe-inspiring beauty and cunning perceptions about our culture and our time.  Rooted in the most concrete loyalty to the here and now, these paintings transcend their own factuality and achieve timelessness”.

I completely relate to the words Linda Chase writes.  When I read them, an internal YES lights up.

Apologies for writing two posts in two days but there won’t be another one for a month now!