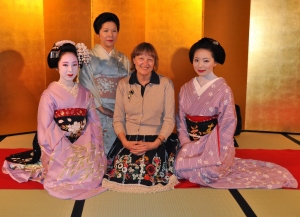 In 2003 I accompanied my husband on a business trip to Japan.  He had to DRAG me as I was not keen to go.  However it did not take long after arriving (about an hour) before my curiosity was seriously piqued.  After the business part of the trip was over, we were wandering in Kyoto one evening when out of the darkness came a maiko in pink with her customer.  I fumbled for my camera and managed two quick photos.  These became my first maiko drawings. (Later on I learned that one should not photograph a maiko or geiko when she is with a customer as this is very impolite but I was ignorant back then.) 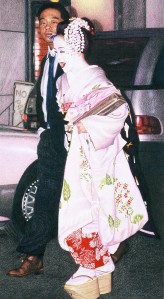 Since 2003 I have made 14 trips to Japan and drawn around 65 pictures of maiko and geiko.  Even though I have taken two years off this theme to draw Paris, I still think that drawing maiko and geiko is my favourite pasttime.  I feel like it is time to visit Kyoto again soon. 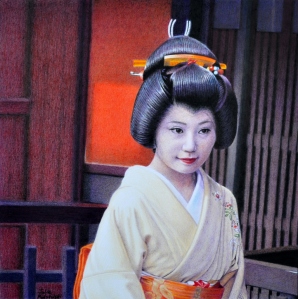 I had already drawn Mamechiho three times before I met her at Ichiriki Tea House in 2010.  She was incredulous that I, a stranger from Australia, knew her name and that I had drawn her.  (In the group photo at the top of the page she is sitting on the right side.) 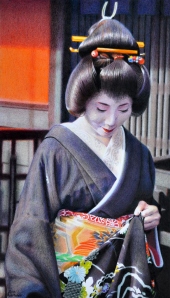 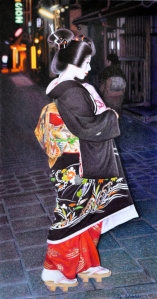 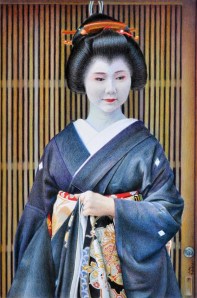 Daughter of Kyoto
Portrait of Katsuyuki on the day of her erikae. Drawn in coloured pencils, May 2014. 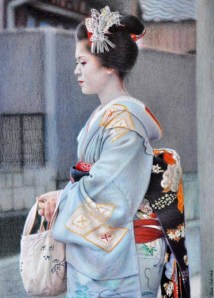 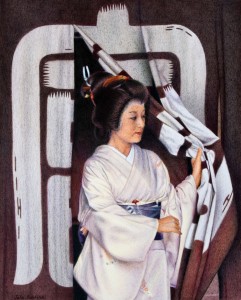 “Entrance” is a drawing of Katsutomo. June 2017